So, had I before seen a performance like the one presented by Tom Gershwin, Eric Erhardt, and Jean-Luc Davis at York Street Jazz on August 30th? I’m going to venture that I hadn’t, nor had anyone else present – provided there wasn’t an old regular from some of New York’s more avant-garde clubs in attendance…
The term “Jazz Trio” will in nearly every mind conjure a piano-bass-drums configuration a la Bill Evans, Ahmad Jamal, or maybe Brad Mehldau or the Bad Plus. Some might envision an organ-drums-and either guitar or sax ensemble, like those of Jimmy Smith. Among the more modern-minded, a few may recall Sonny Rollins’ Freedom Suite trio of tenor sax, bass and drums – but trumpet, reeds and bass? That one’s kind of strange: Intriguing, but admittedly pretty strange. If I hadn’t received an advance program for the evening, I’d have thought – as the other concertgoers must have – that the drummer must be somewhere stuck in traffic! In terms of this unusual instrumentation, the closest historical organization to which I could point as precedence might be the Jimmy Giuffre Three of 1958, which numbered Giuffre himself on clarinet and saxophones, valve trombonist Bob Brookmeyer and Jim Hall on guitar – but even Giuffre in this group and other permutations of the Three relied upon a chordal instrument for harmonic support, whether Hall’s guitar or Paul Bley’s piano in later configurations. These three contemporary players: trumpeter Tom Gershwin, saxophonist/clarinetist Eric Erhardt and bassist Jean-Luc Davis were pretty much butt-naked musically speaking and exposed to every conceivable element, whether withering icy glares or gale-force yawns from the forty-something strong audience. But they wound up not needing to worry about such things – the boys dug down deep and came up each with fistfuls of buried jewelry.

If Jean-Luc served as a fulcrum for the other two musicians, we’ll return to Mister Davis later and look first at the evening’s horn players. Both Eric and Tom I had known of previously mostly through recordings: Erhardt’s A Better Fate (2010, Tapestry Records) showcased him as a highly creative modern composer/arranger with a gift for unusual time signatures within signatures, complex counter-melodies and a player with a somewhat gruff but very pleasant style and sound. These elements of Eric’s playing were certainly in effect over the course of the August 30th concert. Tom on the other hand, brought an element of style I was largely unprepared to receive: His debut and so far only album Sweet Pastimes (2012, Dazzle Recordings) presented a program of evergreen standards in a lovely duet with guitarist Perry Smith. One hears both the breath and the brass when Tom plays – he’s got a very attractive tone, particularly in the middle-to-lower registers of his instrument. When asked by York Street impresario Casey Vader for my opinion of Mister Gershwin’s music my response was something along the lines of “he’s old fashioned in every good sense of the term”. You think you know a guy… In terms of appearance we could call the horn players “complimentary”, if mostly because they are so unalike: The always neatly-pressed Tom polishes his horns to military levels of sheen, while bewhiskered Eric’s flute looked distinctly rusty, his rubberbanded tenor nearly free of lacquer from years of use – an axe the famously unfussy Zoot Sims would have been proud to wield. When it came time for horns to sing together however, the two found a very fine blend… Tom’s warmth on trumpet and Eric’s variety of reed instruments: burry tenor, cool, unbuttered clarinet (actually quite Giuffre-like, apropos for the night), woodsy bass-clarinet, and lithe flute combined as only two players well-accustomed to one another can achieve… Whether improvising freely as individuals or locking together in unison passages the watchword of the evening was lyricism, lyricism. We’ve probably read or heard of a good Jazz vocalist be praised for “singing like a horn player”, but not often enough the other way around: These trumpets and saxes blow like singers. Even the more Free Jazz styled pieces were filled with melodies, and the formally composed tunes most definitely so. But this brings us to the bassist Jean-Luc, without whom the other two could not have kept aloft: it’s no coincidence that the words “bass” and “base” refer to a musical instrument and a foundation respectively… Without a strong bass or base a band falls to pieces and a house collapses under its own weight. A most supportive fellow while others take flight and a tremendously capable soloist, I found it thoughtful that the horns took on a more rhythmic role as Jean-Luc took center stage, particularly on the compositions he had lent to the program. The hardest-working member of the trio that evening, Mister Davis plucked, strummed, sawed and thumped for all he was worth and to good end: the evening was a successful one, for musicians and audience alike.

It’s to Casey’s credit that he always brings such a receptive group of musically hip people to fill his York Street Jazz affairs: Even without the benefit of percussion his friends seem to have the ability to find the ‘one’ and can tap and nod along to just about anything, including pieces in five or thirteen. While a very “Free” sort of evening – especially by provincial standards – most everyone kept apace with the musicians, adopting the appropriate museum-type expression on the impressionist passages and really getting down into the more propulsive sections. For a few brief hours we were Big City People in little rustic Denver, and it was pretty damned special. You are coming to the next concert, aren’t you? 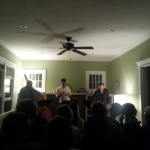 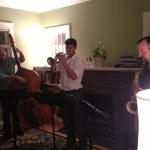 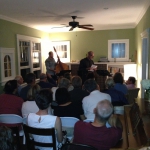 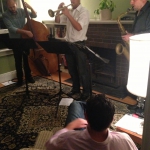